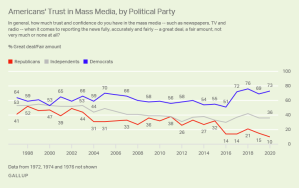 Nearly four years ago I wrote a piece titled: “When the Press Becomes Irrelevant, Danger Lurks” The public trust in the mass media has not improved, in fact trust continues to deteriorate. But the deterioration is now much more aligned to the right. Democrats have a higher trust in news media now than they did in 2017 according to a September report from Gallup. But Republicans and independents have tanked with only 9% of Republicans trusting the news media. One can certainly make an argument that the political division has increased during President Trump’s Administration and he has no doubt aided in the increase of the divide. But “Journalists” are not remaining objective, they are following the left which “loves” them rather than following the facts.

In 2020 CNN, MSNBC, ABC, NBC and even CBS have become a defacto propaganda arm of the Democratic party in the US. It is hard to argue this as none of those so called “News” outlets gave any meaningful coverage of any of President Trump’s legitimate positive accomplishments. If you peruse the archives of this blog, you will find that I am not a big fan of Trump and did NOT support him as President. I was definitely riding the ‘Cruz Missile” in 2016. The strong economy including the amazing Gallup poll showing 56% of Americans are better off now than 4 years ago. This in the middle of a pandemic that has seriously throttled the economy. This same media that is literally silent on any positives attributed to President Trump, feeds like a fat hog on every “Trumpism” with 90% negative reporting. They ignored the President’s amazing accomplishments in the Middle East including a historic agreement between the UAE and Israel and the efforts to bring the Saudis in. They have ignored or even maligned his excellent efforts in China. He has propped up the dollar making it so strong we can literally get away with deficit spending to help the COVID-19 issue. A weak dollar would have made that impossible.

For all Donald Trump’s failings, of which there are many, he has done a very good job as President. Way better than I expected. The media has failed this country by hiding his accomplishments and exaggerating his failings. They have even resorted to outright lies. They also carry the water for Joe Biden, a man that is clearly in mental decline and has a long history of corruption in politics. They are ignoring legitimate reporting on misdeeds and abuse of office surrounding his son Hunter Biden. The media also refuses to acknowledge any voting irregularities and continue to suggest that Republicans suppressed the vote. This flies in the face of the facts that this election broke every record for turnout and total votes cast! The only suppression I see was the pollsters that painted a picture of doom for Republicans that was even MORE wrong than 2016. Was this to keep the conservatives from voting?

As if the total collapse of objectivity in our news organizations isn’t enough, big tech social media outlets are actively and openly censoring right wing reporting including legitimate news organizations like the New York Post, the oldest newspaper in America and the 5th largest. Some liberals say things like they have a right to monitor their own platform and that is correct except for one GIGANTIC FACT: Title 47, Section 230. This section provides civil immunity for social media sites like Twitter, Facebook, etc. regarding content posted by the users. It provides for censorship under very specific guidelines, primarily pornography, open calls for violence, and other specific named content. It also requires that this immunity applies only to open forums and I have yet to hear from any legal authority that political censorship is acceptable under section 230. This could mean that Twitter should LOSE liability protections under the clause and suffer from what would likely be a barrage of legal action. I think Twitter needs to fail as an example to others that open forum includes things you don’t agree with. If you hold their stock, you may want to think about moving away from it because the CEO Jack Dorsey was destroyed in front of the congressional committee last month. Congress very well may eliminate section 230 or at the very least amend it. I believe that Twitter became a publisher the minute they censored a legitimate news article that did not fall under the guidelines afforded under section 230. Maybe Twitter should be sued to death. It seems Twitter is no longer an open forum. They are now a effectively a publisher.

Democrats including some genuinely smart people I personally know, are literally ignoring the collapse of a free and fair media because right now it is a means to what they see as “fixing” America’s problems. They like what they are hearing which is basically as Ben Shapiro often says “Big Orange Man Bad.” What they seem to not understand is that the Democrat Party has become very emboldened to take actions that are highly objectionable to large swaths of their own party not to mention those in the Republican party knowing full well the media will run cover for them. This gives them tremendous amounts of power that is absolutely corrupting them. When the media looks the other way corruption becomes too easy and any political party afforded immunity in the press will become corrupt, that is a given. In the end the main stream media’s complete failure to objectively report to the American people will leads us to a Democrat totalitarian regime and no one, even a plurality of Democrats will like the result.

If we look at one common thread in every dictatorship, totalitarian leftist regimes, and every fascist regime, is a propaganda media machine. Why on Earth would we want that for either side of the aisle? The answer is WE DO NOT!

General Election 2020November 3, 2020
Will the Republicans hold the Senate?

Well, let's see what this bunch will doJanuary 3, 2021
35 days to go.
Follow Liberty or Death on WordPress.com