This title question may seem a bit odd, but in ten days one of two very flawed candidates will almost certainly become the 45th President of the United States. As I and many others have suggested this is an election of ‘not the other guy’, rather than ‘for my guy’. It is a sad commentary on the state of affairs in Washington D.C. and both major political parties. But which ever one of the two ‘undesirables’ ultimately occupies 1600 Pennsylvania Avenue, one thing is very likely; they will represent a paramount shift in American Politics. It could be for the better and it could be… much worse.

I have heard a great many pundits and editorial commentators state that Donald Trump is the “change” candidate and Hillary Clinton is the “status quo” or a “third Obama term”. Although there is some genuine merit in these suggestions, I feel it is much deeper than that. There are a couple of major dynamic elements tugging at the core of the American political system and it’s relationship with our diverse constituency.

Hillary Clinton is a known entity; for some thirty years or so she has been involved in the political system as a First Lady of Arkansas, First Lady of the United States, a US Senator from New York, Secretary of State, and a two-time presidential candidate. Likewise Donald Trump is also a known entity, but not for politics. He is famous for the real estate and entertainment business and being a bombastic, outspoken New Yorker. Mrs. Clinton is undeniably the insider choice whereas Mr. Trump is clearly a DC outsider.

Donald Trump already represents a huge and swelling portion of the American people who have grown disgusted with politics as usual. The people are sending Washington DC and the establishment politicians a very clear signal that for the most part is being ignored. That ignorance is what lead to the rise of Trump and Sanders as legitimate contenders for president.

The Republican party insiders and the movers and shakers of the conservative political establishment, clearly did not want Trump as their candidate. The American people voting in the primaries had other ideas. Mr. Trump managed to shatter Republican primary voting records dating back some 50 years. The Democrat party establishment didn’t want Sanders as the candidate either. Despite the overwhelming support expressed by Democrat voters, Sanders was benched in a secret backroom bamboozle orchestrated by the DNC and the Clinton Campaign, and supported by CNN.

The message is clear with the people behind Trump: “enough is enough”. If Donald Trump becomes the president, there will be a major shift in the political establishment. Michael Moore, noted liberal activist film maker, released an anti-Trump movie recently that has a section in it, where Mr. Moore personally empathizes with the Trump voter. He makes a reference to Trump representing a “human hand grenade” to blow up the system. These comments were made on the Fox News show, ‘The Kelly File’. He also suggested in that interview with Megyn Kelly, that after four years of a Trump presidency, America would be a completely different country. Although that is a nebulous description his tone conveyed the notion that the change would not be better. Despite the Trump campaign’s decision to take the empathetic clip of Moore as an endorsement, nothing could be further from reality.

There is however a golden nugget of undeniable truth in Mr. Moore’s position regarding the “hand grenade” of Donald Trump. He will undoubtedly shake up the system in a manner not seen since the “New Deal”. But it won’t necessarily be a bad thing. Even if “The Donald” loses, it only needs to be close for the two major parties to take serious note of how fragile things have become for them.

In my humble opinion, I feel like Donald Trump has a 50/50 chance of being at least a mediocre Commander-in-Chief. Of course he has a 50/50 chance of being the knucklehead his opposition in both parties is worried about. I want the hand grenade in DC, I have been sick and tired of our dirty, corrupt system for 25 years. Pull the pin and let’s rebuild out of the rubble.

That may sound terrifying, but whether the Republicans or the Democrats control the house and Senate, our scary New Yorker will be held tightly in check. Washington DC wastes money in a fashion so gluttonous, that we as people should be ashamed. The federal government has encroached on our freedoms with complete and utter disregard for the constitution. The liberal wing of the Supreme Court continues to support the dynamic shift away from liberty and towards totalitarianism. No matter how you slice it, the hand grenade approach will likely end up helping in DC over the long run.

I believe that it doesn’t matter whether Trump is a good or even an effective President. Just getting to the big chair sends a powerful shock wave through the establishment that America will no longer stand for the ineptitude of government. His very presence as POTUS will forever change the landscape and it won’t be all bad. If Trump is elected president, I am certain he will be one term and done. The damage he may render to our country will be far less than the left realizes. He is hated by both sides for heaven’s sake. He will be well-checked by Congress.

Well enough about the underdog, what about our front-runner, Hillary Clinton? Mrs. Clinton is corrupt my friends, for this, there is truly little doubt. Even among the Democrats themselves, she is undesirable. The Clintons are demonstratively foul. The amazing run by a 74-year-old self-described socialist proves that the American left is just as dysfunctional as the conservatives. They wanted change and they were ‘feeling the Bern’. I believe that Bernie Sanders was the nominee and that the DNC conspired to keep him out. Revelations in all these Wiki Leaks disclosures have made that quite evident. The only thing the Clinton camp seems to say is “Russia bad”, “Wiki Leaks bad”.  That’s not a compelling defense.

There is no question that the emails dumped were obtained illegally and that is of great concern that a foreign government may have been behind it. But that is a separate issue and it does not grant immunity to the damning evidence against the Clintons and their associates. Any argument that it’s the Russians fault is overshadowed by the very fact that former 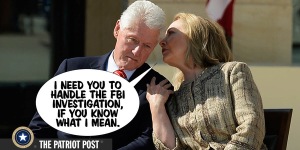 President Bill Clinton, stopped the Attorney General’s plane on the tarmac at a major airport to have a little chat right before that very person was to render a decision on prosecuting his wife, Hillary. I wonder how many thousands of people were screwed by that episode that no doubt shut down that airport for a while. Needless to say the ruling was most favorable for Hillary.

If America elects Hillary Clinton as the 45th president of the United States, I believe the results will be far worse than the ‘Trump-grenade’. It is not anything that Mrs. Clinton will or will not do once in office, and it has little to do with her platform; rather it is what her election represents. If we elevate an absolutely corrupt politician to the highest office in the land with the full light of day exposing her impropriety, what does that say about us? Yes the same question can be made against trump to a lesser degree with the allegations flying about sexual misconduct, the raunchy talk on the Billy Bush tape and other undesirable ‘Trumpisms’. But that is largely a character issue and both candidates struggle in that arena. Mrs. Clinton is corrupt, a dirty politician, and if she wins it shows that Americans will always vote on idealism even if it means selling their soul to the proverbial “devil”. Don’t misread that liberals, “selling your soul to the Devil” is an expression as much as an actual exercise, and you all know that.

If Mrs. Clinton can reach the highest position of elected office with all this rotten baggage, we can say goodbye to ever seeing a clean politician again. Furthermore, if Hillary Clinton wins, it will firm up the cement that the mainstream media of ABC, NBC, CBS, CNN, New York Times, etc. is a defacto propaganda arm of the Democrat party. I believe we could actually become a one party nation by the end of the next decade. Does that sound outrageous?

Well just look at the ridiculous lack of coverage and absolute failure to do any investigative journalism on this important series of serious allegations of corruption with the Clintons. When Richard Nixon was facing allegations that were choir boy stuff compared to this, Woodward and Bernstein went on the warpath hunting down every lead and turning over every stone to get to the truth. No such effort is underway with these Clinton Wiki Leaks. The “journalists” are sure spending a lot of quality time digging up everything they can on Trump.

Let’s face it, journalism in America has been in a long decline that started when Walter Cronkite went off the reservation while delivering the news and opined about the futility of the Vietnam War in 1968. Whether his editorial was right or wrong is not the issue, his objectivity left the building and at that point he failed as a “journalist”.

Michael Moore is worried that the Trump “hand grenade” will fundamentally ruin America. But what will a one party system in America mean? It will not be good, my friends. We have a free press in this country, but that free press has decided not to exercise its right to get to the truth regarding Hillary Clinton. That free press isn’t acting free anymore. It seems it is only “free” to report what the Democrats want reported. Although they are simply failing to do good work, someday, in a one party political system they may lose that freedom of choice and go the way of Pravda.

If we elect someone we know to be crooked, how do we go after all the third world corrupt dictators? Seriously, with Hillary as President can we say anything about Mexico’s cartel government? Can we take the high ground on corruption? No, no we can’t.

I for one do not wish to see the decline of our great nation, and having this kind of open and nefarious political corruption rewarded with the election to the office of President, cannot possibly lead anywhere else. Like him or not, agree with him or not, Trump is the better choice over Hillary. Democrats with a conscience that can’t vote for Mr. Trump surely should vote third party, perhaps Jill Stein; because anyone with a conscience shouldn’t be voting for Clinton.

General Election 2020November 3, 2020
Will the Republicans hold the Senate?

Well, let's see what this bunch will doJanuary 3, 2021
Can we please get the people's work handled?
Follow Liberty or Death on WordPress.com